I'm currently using Yahoo Messenger for Mac (Version 3.0 Beta 3). I rarely use YM for anything except chat. In Windows, I used to play music on Launchcast, or occasionally share photos with friends, but even if I don't have those features in Mac, I'm happy.

I do, however, have some peeves with the Mac version. I've tried to contact Yahoo about them but haven't had much luck in getting any replies. I'll try again though.

Now these are rather superficial concerns, I'd say, but something that irritates me, especially as it's my computer and I should be able to personalize it in the way that I want right?

YM for Mac peeve #1: Changing font colors won't stick
I love colors, as it makes the chat experience more interesting. I use Color Effects with the Windows version, keeping the color in the range of blue hues. It's quite nice to look at, and I was disappointed in learning that the Mac version doesn't have it.

No worries. As long as I can change the font, I'm happy.

On the main menu of the YM, choose Preferences then Messaging. I changed my font to the color I want and... it didn't change. I logged out then logged back in (the usual solution for Windows based programs, a habit I still have hehe) and still no success. 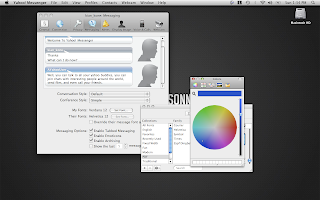 For some reason I pressed Cmd+T and got the text box up, so I was able to change my font color. Yay!

None of the sites (which included Yahoo's own) I tried going to offered a solution that worked. I posted my concern on the this blog entry (scroll to the bottom) but still no success (much thanks to Karl, who replied).

YM for Mac peeve #2: Custom image disappears
I rarely use the YM Avatar. Mostly because I do like to use my own, er, creative shots. I currently use a photo I took of myself with half of my face covered with a book.

One day, I noticed that my display picture was gone. Instead, I had that generic silhouette head. So I went again to the preferences and tried to change the image. I successfully browsed and chose the picture that I want, but the image isn't there. 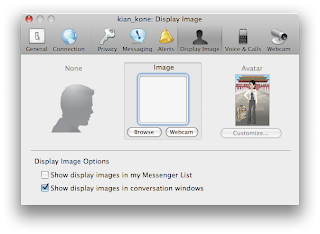 I keep trying to do these changes but still to no success. It really is quite frustrating. The first time it happened, I decided to stick with the Yahoo Avatar and tried to change it a few days later. Now, its happened again.

I don't know if it's happening to just me, because I haven't run across any sites where people have the same concern. I just hope it could be fixed.
Posted by Kat at 1:21 PM 5 comments:

Changing the default file type on Word for Mac 2008

I finally got Office for Mac 2008 installed in my MacBook. Many would say that I could have just gone for an OpenSource program like Neo Office or Bean (both of which I tried and liked immensely except that they don't seem to have the auto-capitalization working), but since I could get Office at a very decent price, I decided to go for it.

Like the version for Windows, the new Office automatically defaults the format to the new "x" file type: .docx, .xlsx, and .pptx, if I'm not mistaken. I encountered this problem in Windows a few weeks back. My mom sent me an Excel file that I had to print but I couldn't open it. A quick Google search helped me identify it and an online converter helped me turn it to a document my older Excel could read.

Eventually, I taught her how to pick the extension .doc everytime she saves it.

My uncle, a recent Mac user, also had problems with the file extension and manually had to change it everytime he saves a document. Sometimes he forgets, so when he sends the document to his clients, they can't open it. Not everyone has made the switch to the new Office in either platforms

Tinkering with Word the other day, I found out that you can change the default file type your document will save in. I think it will also work for Excel and Powerpoint, but I haven't really tried.

On Word, choose Preferences
Under "Output and Sharing", click "Save"
Locate the option that says "Save Word files as" and choose "Word Document 97-2004 (.doc)"
Click on OK. 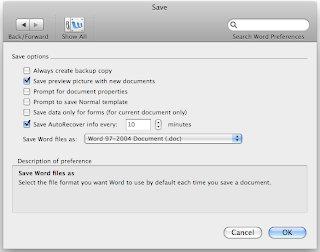 The next time you save a new document, it will automatically pick .doc. You can change it to whatever format you want though, and this method is only for those who need to send files to others who use an older Office.

Although I hear Neo Office can open .docx files. :)
Posted by Kat at 7:33 PM No comments:

Labels: how to, macbook, office for mac, technology, tips

Don't you just love the Internet? You get to pick up all sorts of information off it with just a click of a button. It's also so easy to keep in touch with people and keep them updated with your life. Communicating with family abroad is as simple as logging in to a chat software and there you go. There's simply no reason for you not to be communicating, as well as no reason for you to be out of the loop (unless you're lazy or just totally not into the Internet thing).

It's also amazing how you can pick up great bargains through the Internet. Anyone can buy anything so long as they have the money, and everyone can sell everything, so long as someone's interested. Those who are extra resourceful can even pick up huge discounts if they have the patience to look. That's how I got my MacBook.

Another great thing with the Internet is being able to pick up information about anything and everything. Of course, one has to practice caution because you aren't 100% sure the information you're picking up is accurate or even true. That happens! It still helps to have more than two resources, and if you could back it up with a print reference, so much the better.

I've joined plenty of forums in the past years, mostly tech and gadget forums, as well as art and graphic design forums. I loved the interaction and how someone always has an answer to your question that most sites don't seem to have. I joined a forum for Filipino Macintosh users (PhilMug) early last year when my cousin gave me her old iPod Shuffle (1st gen). It won't work, so I joined the forums to ask for help. Unfortunately, no one was able to help and my brother was eventually able to make it run. It has long since died, but I kept my forum membership.

When I decided that I'd get a MacBook, I logged into the forums to search for user opinions about what model to get and how hard is it for Windows users to switch to the Mac OS. I ended up locating a dealer where I could get my Mac at at very good price, and even purchased an iPod Nano 4th gen.

In the same forum, I found tips on what would be a good cleaner for my MacBook and where to get it. I passed by Office Warehouse today, got the cleaning product called Sher and when I got home, used it and it yielded pretty good results.

Like I said, amazing thing, the Internet is. And I haven't even started on talking about discovering old friends, meeting new people and just plain having fun.
Posted by Kat at 9:07 PM No comments: