And so, it starts.

It's my turn for the Great Moleskine Giveaway. One of you guys will win a Moleskine Large Plain Reporter notebook, and it will be shipped to you for free!

Visit Strangely Out of Place to join.

Reminders:
- Contest is open to Philippine residents or those with a Philippine mailing address only.
- Contest will run from November 22 to  November 26. At the end of the contest, I will announce the winner and the next blog to host the contest.

What are the special things that you look forward to every Sunday?

Even as a child, Sundays were often touted as the family day. My parents would take my brothers and I out, nowhere really fancy, just to the mall or the park. Sometimes, if my grandparents were visiting, we'd schedule some out of town trips with my uncles, aunts and cousins. Of course, if we were in the province, Sundays meant early morning church before everything else. Sundays often become special not because of what we do, but who we spend it with.


Nowadays, Sunday is "me" time. Saturdays are the days where I often go out, meet with my friends or do more active things. Sundays, I do the laid back activities like catching up with my blogging, reading books, or, if I'm up to it, cleaning the house. Sometimes, my brothers and I would go watch a movie and just spend some time together.

What do you look forward to on Sundays?

Hi everyone! Just want to give you a heads up on an upcoming contest on my main blog, Strangely Out of Place. 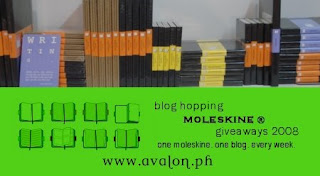 It's a project spearheaded by Jasper Ong of Avalon.ph, an online shopping site for books, journals and other great items at bargain prices. The Great Moleskine Giveaway is a series of contests hosted by various Filipino blogs, and as the name suggests, the winner will receive their very own Moleskine notebook.

Currently, four blogs have already done their contest. Mine will happen on November 22 to November 26. I will post the mechanics on my blog on that day, and anyone with a Philippine mailing address is invited to join!

Visit Strangely Out of Place for details. In the meantime, you can check out Avalon.ph's blog for the list of blogs that are also in the contest.

I haven't been updating this blog much, mostly due to lack of anything to say. Well, let me correct that. I do have a lot to say, but I'm mostly just lazy to say them.

Life has been busy so far. Work is work, no need to expound on that. Changes seem to be looming the the near future, and I hope it's a good change, not one that'll give me and my colleagues more headache.

My aunt and cousin (whom I haven't seen in 18 years) is visiting from Florida. They'll be flying back on Saturday, which is a pity because I haven't really gotten to spend time with them. Hopefully, if things fall into place, I'll be visiting them next year.

I also joined the NaNoWriMo this year. I've been a member since 2004, but I haven't really finished anything. This is the farthest I've gone and also, this is the year where I actually have more friends who are doing NaNoWriMo with me. It makes it more fun because it's sort of a competition on who gets 50,000 words first. Well, to me anyway. :)

My brother's Internet shop is now fully open for business. He's been open since October, but he only had network games. Now, he can rent out computers for people to go online. I'm thinking of getting him a coffeemaker, just for the heck of it.

Oh, and I read Sherrilyn Kenyon's "One Silent Night" the other day. It's Stryker's turn, and there are alot of revelations in that book, not just about Stryker but also about the other characters in the series. I cannot wait for the next one in the series. I finished the book in maybe 4-5 hours, while in between work. Not bad, methinks.